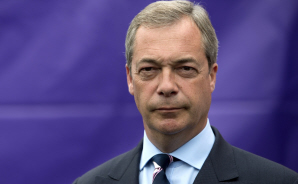 "I have been saying for a long time that we need a much more muscular defence of our Christian heritage....we believe Christianity should be recognised by Government at all levels."

The party outlined proposals to introduce a form of conscience clause into equality law as part of its "Christian Manifesto". It follows after the controversial case of the Christian bakery in Northern Ireland who were taken to court for refusing to make a cake featuring Sesame Street characters with the words "support gay marriage".

The case led to calls for the law to be changed in order to allow individuals and businesses an exclusion from discrimination law should they refuse to provide services that go against their religious convictions.

Supporters of the clause claim it is needed to protect freedom of belief. UKIP stated that they would extend the concept of "reasonable accommodation"- the idea that employers and other bodies should make allowances for people's beliefs if doing so does not impose an undue burden- in disputes over same-sex marriage.

The manifesto states that although UKIP opposed same-sex marriage, it would not seek to overturn the change.

"We will not repeal the legislation, as it would be grossly unfair and unethical to 'un-marry' loving couples or restrict further marriages". "But we will not require churches to marry same-sex couples".

"We will also extend the legal concept of 'reasonable accommodation' to give protection in law to those expressing a religious conscience in the work place on the issue."

A spokesman for the Coalition for Marriage stated:

"We welcome this move and urge other political parties to follow his brave and common-sense approach." "It can't be right that ordinary people with traditional beliefs are being persecuted and hounded out of jobs because of the liberal orthodoxy in Westminster."

So will this protection to Biblical understanding of marriage protect Polygamy and the keeping of concubines?

In reply to Andrew that is old Testament teaching and does not apply to present day understanding of scripture. But he has a point because now that the government has taken away the bench mark of the male and female in marriage there is nothing stopping a legal challenge for many wives or husbands in the UK.

Well at least there is one political party that is prepared to stand up for our Christian heritage. Lets hope that the many millions of Christians in this Country hear this and back UKIP for a real change!