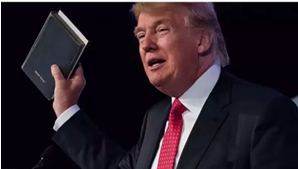 My Faith Votes which is a nonpartisan organization whose honorary national chairman Dr Ben Carson has been very active over the last eight months, producing television and radio public service announcements that ran over 110 million households across the United States and urged Christians to vote.

Exit polling numbers show that a higher percentage of white voters voted for Trump than they did for President George W Bush in 2004.  My Faith Votes played an 'indispensable role' in the 2016 election.

"I think My Faith Votes was one of the three most significant organizations that affected the outcome of this election because they focused on just one thing," Moore told CP. "At My Faith Votes, we focused on getting registered Christians to fulfill their moral and patriotic responsibility of showing up at the polls. We didn't just do that in the last 48 hours. We did that over the last eight months."

"We had PSAs running in a 110 million households. We had six ads running daily on virtually every Christian radio station in America," Moore, a CP senior editorial advisor, added. "We had over 20 events that millions and millions of people either watched online or attended in person."

The biggest factors that contributed towards Clinton's loss was her stance against religious liberty and Clinton's radical stance on partial-birth and late term abortions.